Mar. 5, 2010: This glorious day I spent figuring out one problem with the Flash video player and discovering yet another. My original problem was the sizing issue. When you went to enlarge the player, the two edges I couldn’t get “officially” colored in would show up in the corners and the beveled edges would appear along the top and side edges. Well, I basically went into the skin layer and just tore it apart. This was the only way I could click on the corners that I couldn’t get to before. I then just put it back together again. This is what it looks like now:

This is what it looks like on a default HTML page, unlarged. 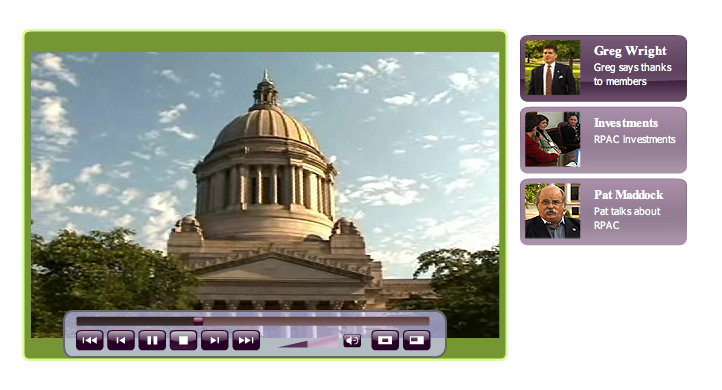 This is what it looks like on a default HTML page, engorged. 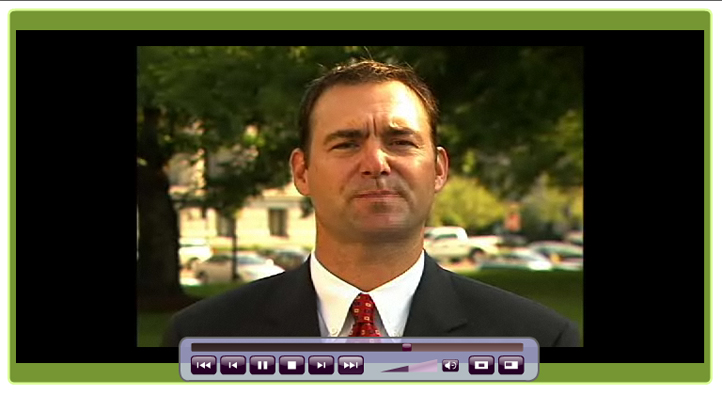 Problem solved. At least, that problem solved. What the new problem is is that when you don’t want the video or the playlist to start auto playing, it doesn’t show up on the page. When you set either the playlist or the player to not auto play and the other to auto play, it shows up but doesn’t play anything. I found a work around (or so I thought) where you set both to auto play and then insert some Javascript that tells the page to not auto play the playlist. That actually didn’t work. At around 3:30 pm, I was told to study up on Flowplayer. This is what I planned to do.

Mar. 6, 2010: So I spent half of the day today studying up on using and implementing Flowplayer. Flowplayer is an open source (unless you don’t want their logo in the corner, then it costs money) and is completely customizable. It’s quite nice, but a little overwhelming to research. They have an amazing amount of documentation on their website. The second half of the day I spent working on getting the player set up on one of my pages on my personal site. Hence why backgrounds will be red. We also had a meeting today with the IT department. I’m not sure if I’ll have their site to show at the end of the quarter, but talk was thrown around about installing Linux on one of the old computers there so I can get something together to present. I’ll talk more of this next week when I know more.

Mar. 8, 2010: I spent all my time getting the video player mock up ready for testing on the beta site. This is what some of the embeded Javascript and some of the HTML looks like:

The Javascript and some HTML. In the head (not pictured) are some “imports” that must be declared. 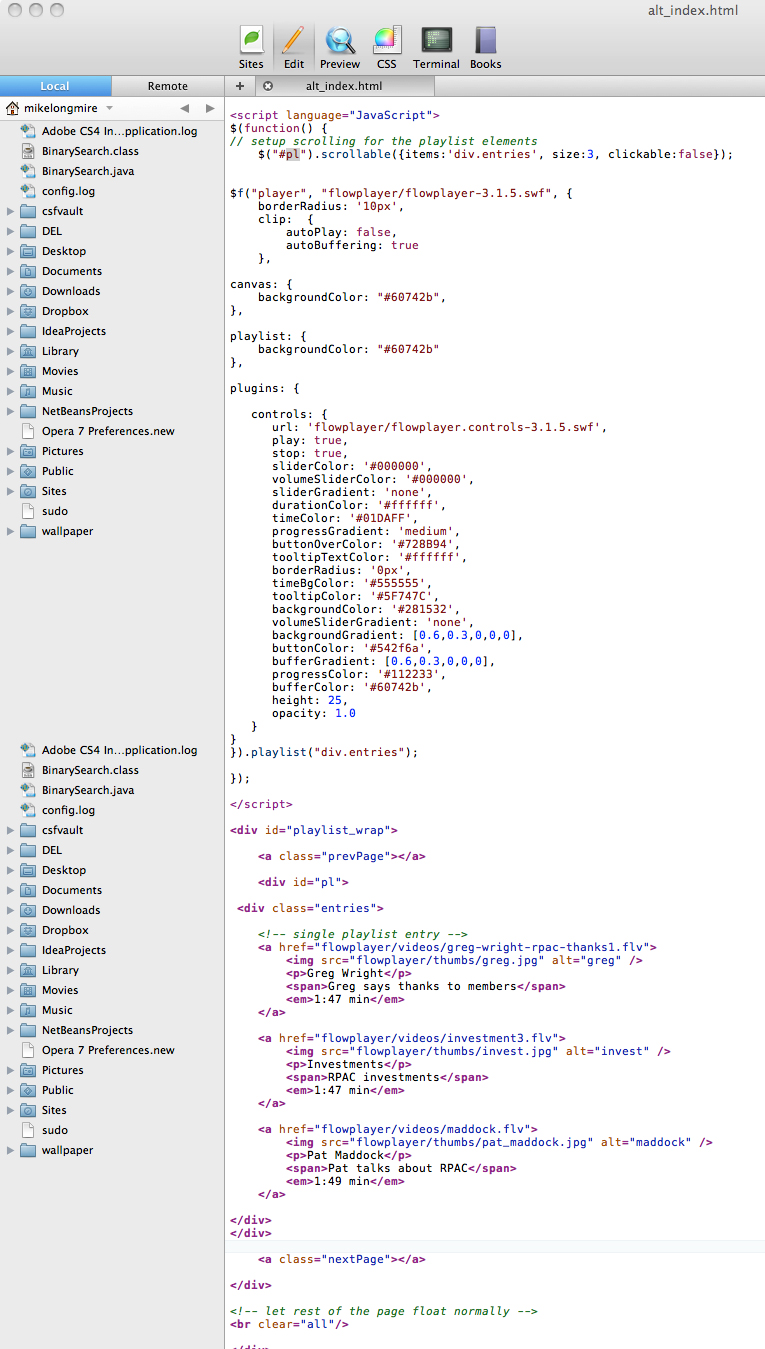 And some of the CSS. 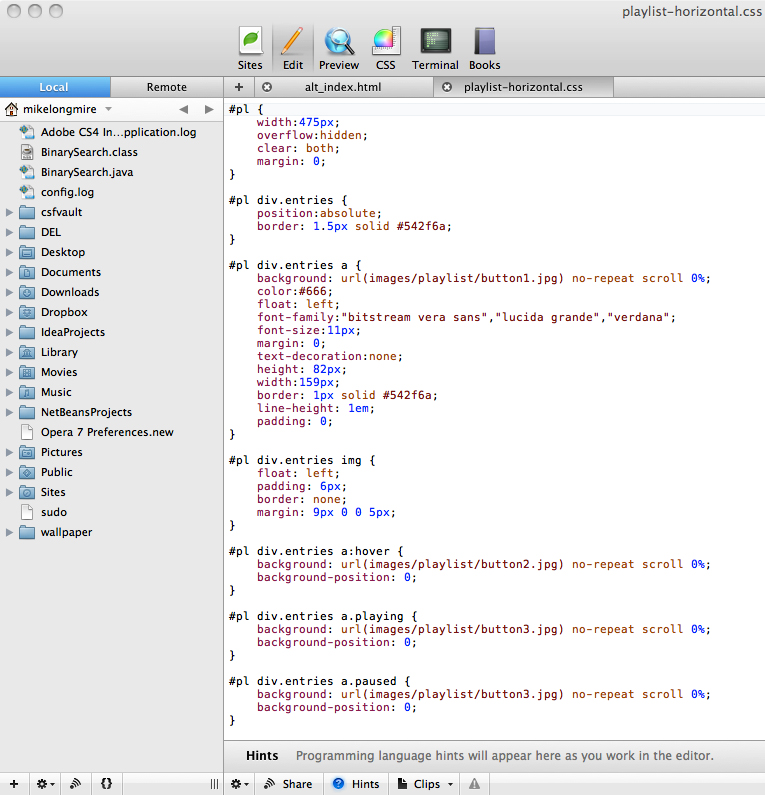 And now lets bring out the end result.

First, this is what it looks like when the cursor is hovered over a button. 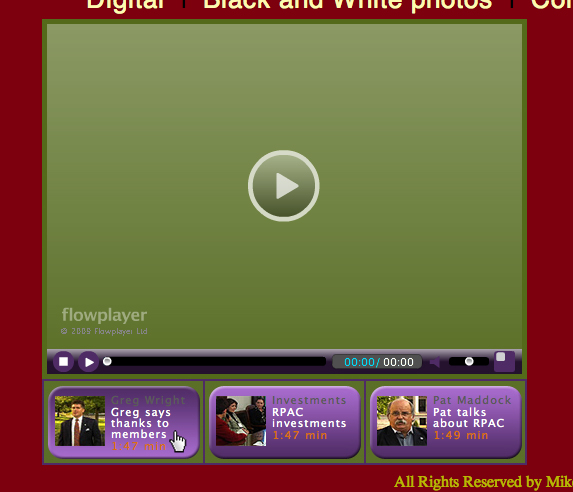 And when the button is clicked. 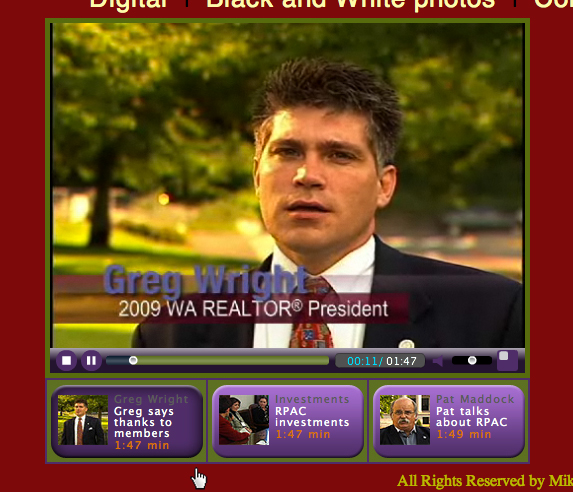 Ignore the red background. So this is where I’m at right now. We tested it on the beta site. You have to do some special encoding that I can’t show you for reasons of security. But here’s the link to the Flowplayer instructions. It works, but we haven’t tried multiple videos yet. Next week is the finishing touches phase. By Thursday it has to be presentable for Stevie’s, well, presentation. It’s pretty fucking exciting.

Mike Longmire  @duckie715
“In the heat of battle my father wove a tapestry of obscenities that as far as we know is still hanging in space over Lake Michigan.”
reply retweet favorite

Mike Longmire  @duckie715
@meowrika Maybe for Christmas we can get him a HAM radio.
reply retweet favorite
Load More...