This post deals with a weeks worth of work. I’m just that kind of guy.

I don’t know if the title is apropos, but this may or may not be the final post about the internship. I’ll mainly be concentrating on finishing my paper, so I’ll do what work I can on the CMS. For the past week I’ve been: changing the theme for the fourth time (it’s more or less the same), adding a navigation bar with dropdown menu; changing the site from a three column setup to a two column to match the original site more; adding a lot of content from the old site and styling it appropriately (making it look like the old site as much as possible). The following are some final(?) screenshots:

The dropdown module that I added. 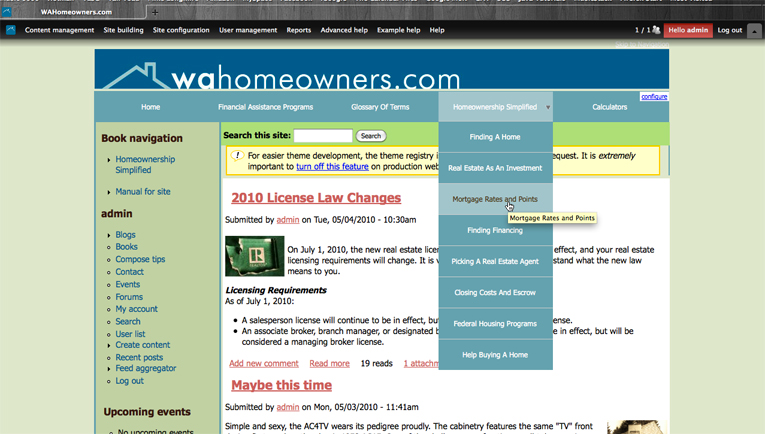 The original dropdown on the WAHomeowners site. 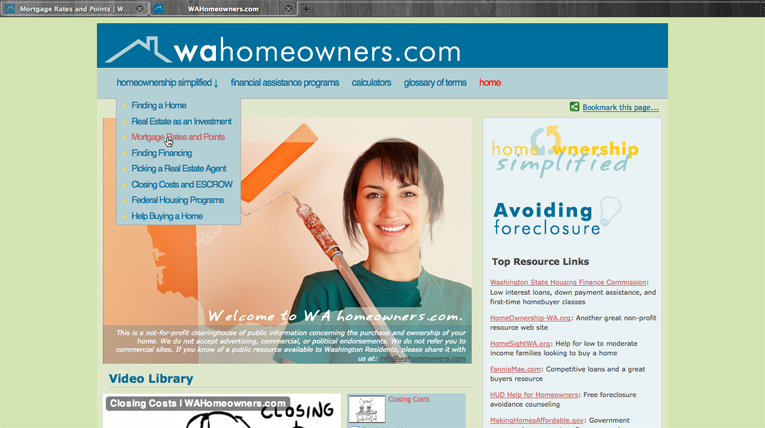 I moved the dropdown to the left side of the site because it was covering up the left sidebar. Since this is only a working example for them, I didn’t see any problem with this.

The next screenshots are of some of the content I added from the old site to the new site. This was a little time consuming and involved inserting some good ‘ol HTML:

This is the original “Mortgage Rates And Points” page. 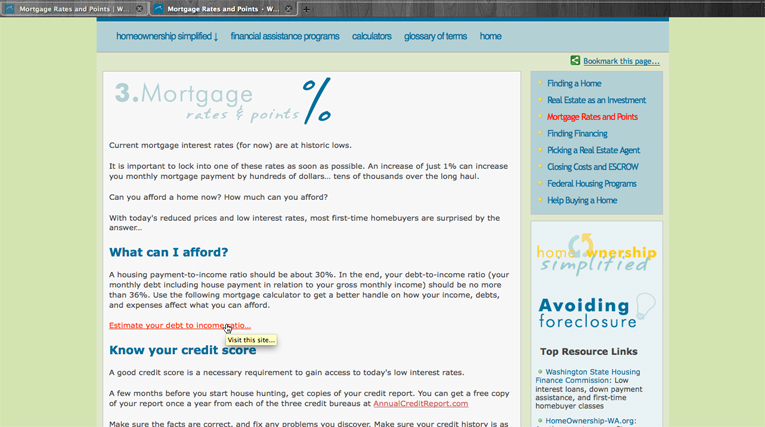 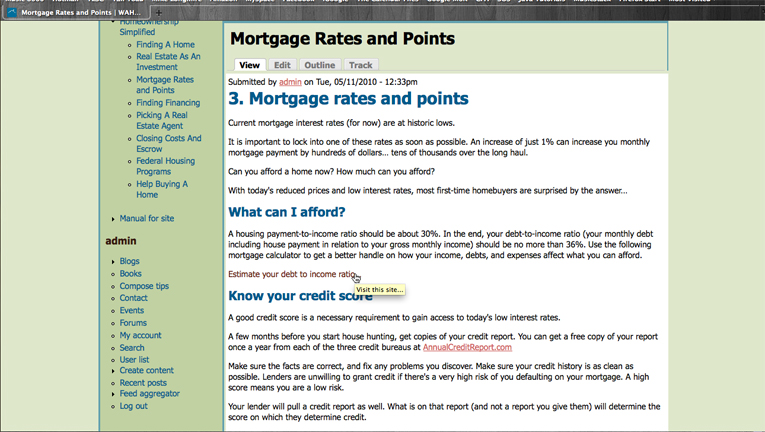 I obviously am missing some images still. I felt that it was more important to get some info up there and style it as close to the original as possible, with the limited amount of time I had left.

These screenshots are of some of the backend of the Drupal site. If you’ve never worked with a backend before, it can sometimes look radically different than what appears on the frontend.

This is a shot of the “Input settings” portion of the backend. 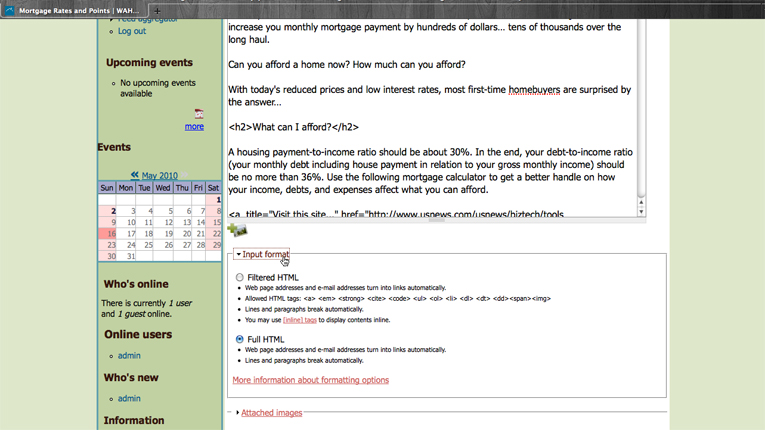 You have two choices when inserting HTML into content in Drupal. Here, I’ve chosen “Full HTML” because while “Filtered HTML” recognizes the anchor tags (<a>), it doesn’t recognize the header 2 tag (<h2>). 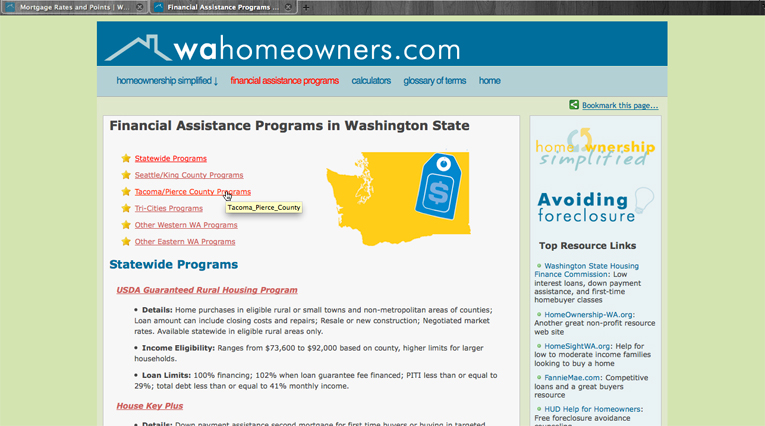 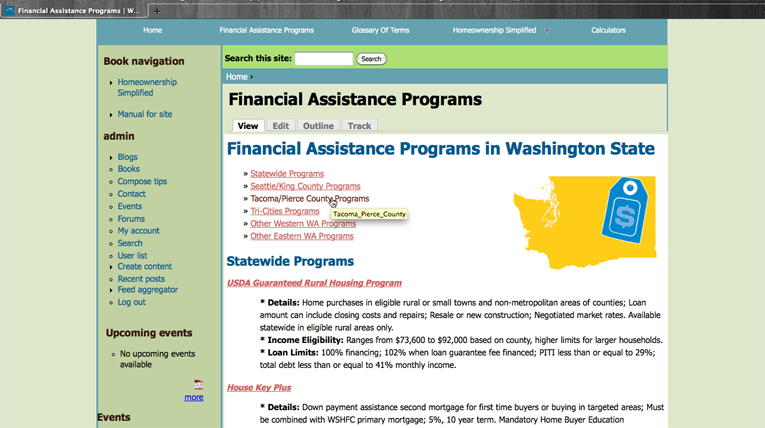 This page was harder to do because it technically involves PHP scripts calling various nested pages. I wasn’t sure how to pull this off in Drupal. So I created a separate page for each one and just had the links refer to each.

A screenshot of the backend of the new “Financial Assistance Programs in Washington State” page. 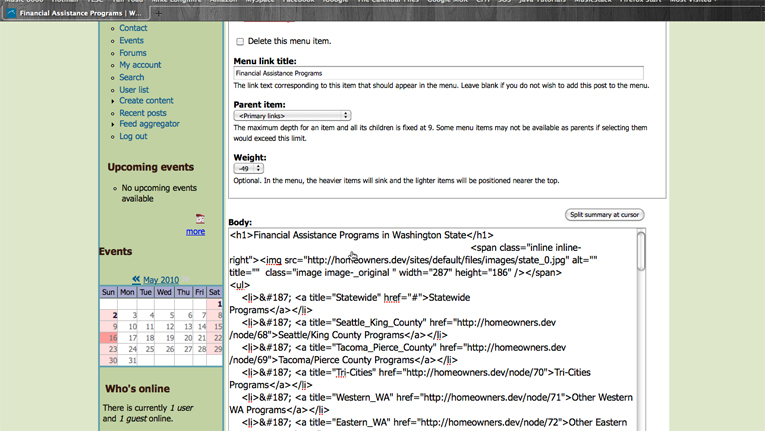 As you can see, this also required “Full HTML” settings. A header 1 tag, an image placed inline (via the Image Attach module), escape characters, anchors, and unordered lists. It took me hours to do these six pages.

Finally, here are some screenshots of the DHTML menu that appears in the left sidebar. You can set which expandable menus get these. I set it so every one of them that appear in said left sidebar gets it. I tried to capture the effect. It was harder then it looks.

A shot of the menu collapsed. 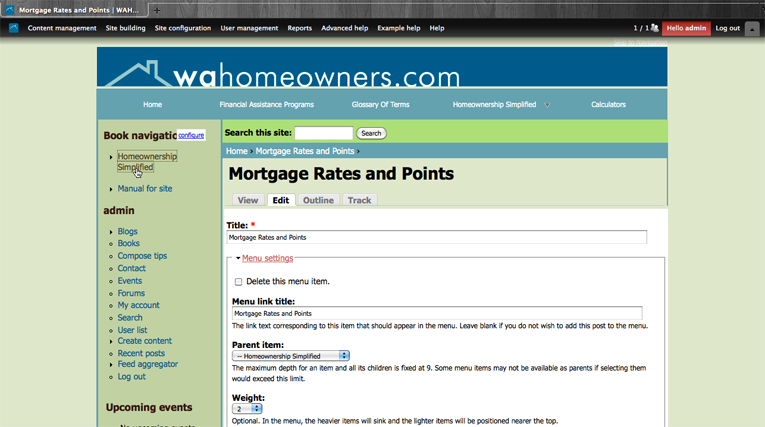 An attempted shot of the menu expanding. 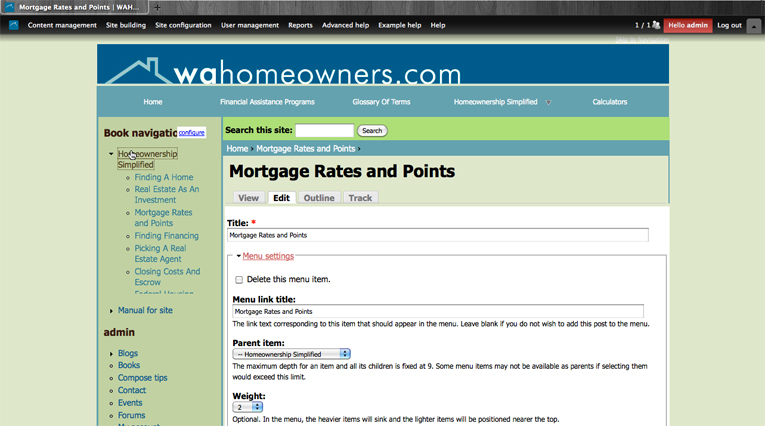 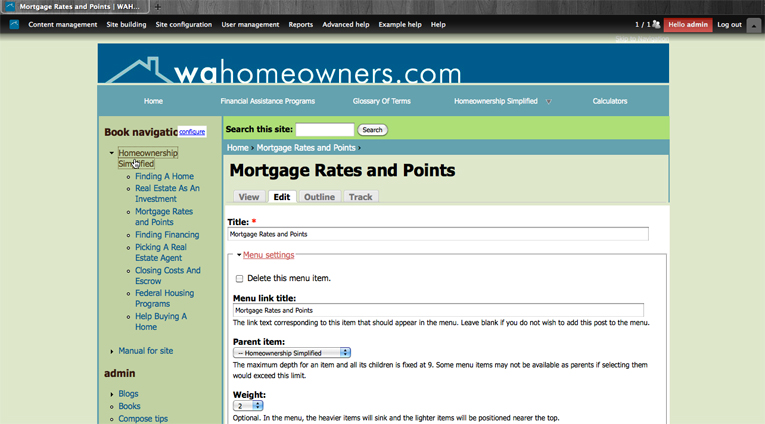 This is as far as I’ve gotten. I’m going to try and put the site up onto my own personal space and then have some people create accounts and add more content. I may or may not add more modules before the end of the quarter. We’ll see.

One Response to “The Finishing”