Jan. 5, 2010: The first day of the internship. I met my fellow “employees”. Most of them I had met before, since Erika (my wife) has worked there for some time now. I talked with Steve Klaniecki (my boss) about the job parameters and expectations. After that, I continued with studying PHP and doing the exercises from the book, PHP (Visual Quickstart) by Larry Ullman. Stevie Benge (webmaster) was not present do to being out of town, hence why I worked on exercises and studying but not any project yet.

Jan. 7, 2010: This day I spent studying some more on PHP and Java, as well as starting to read up on Content Management Systems and how to implement them. I had also begun studying how to manipulate PHP to create a blog (for the Realtor site). Working in an office is so different from working at Music 6000 (shipping and receiving and even working on the website) where it’s at times loud, or working on an assembly line. It’s so quiet, it’s a little disturbing.

Jan. 12, 2010: Today Steve had me start off by doing some research on Tech Support pricing. I think he’s tired of people thinking they are an IT department, instead of design and web content. Still no Stevie, he’ll be here on Thursday though. No Erika also, since she telecommutes on Tuesdays. It’s so quiet. I did, however, get to finally study up on Drupal and WordPress. I’m getting really excited about this whole internship crap. I spent the remainder of the day practicing more PHP.

Jan. 14, 2010: We did much today. Stevie’s back and we went through setting up Drupal on my local computer and I perused around it for a while. It’s a little intimidating, but at the same time pretty fucking exciting. We then set up WordPress on my computer as well, after which, I spent some time mucking about in it. After he got back from lunch, he had me download and install Navicat Lite on my computer, which is software that we’ll be using to mark up the tables for the databases. I then got to start on my first table (see below) in Navicat for database practice:

My crazy table in Navicat. 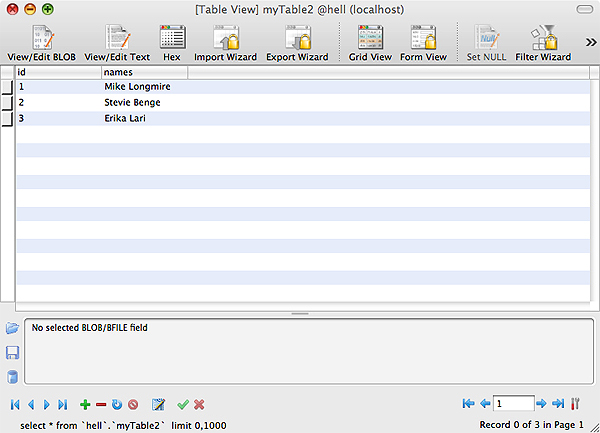 The PHP code to call the table. 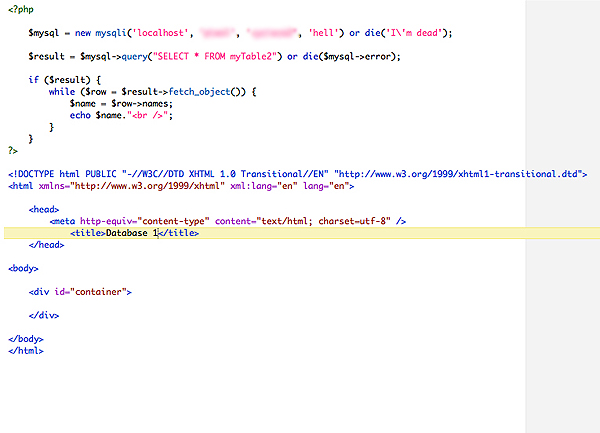 Finally, the amazing table displayed in a web browser. 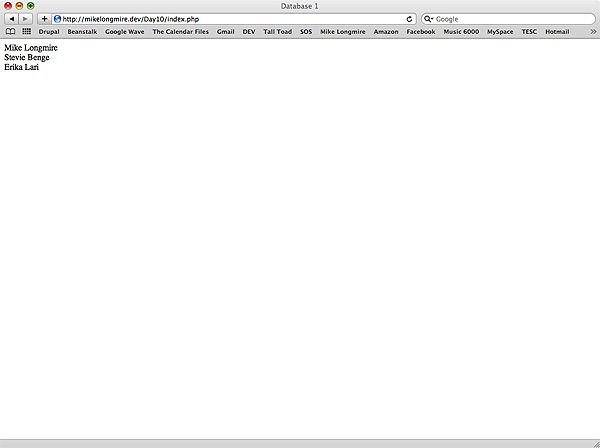 To finish the day, it was on to more studying of PHP.

Jan. 19, 2010: Today was a little short here in internship land. I spent the morning up at Evergreen because we had to do project presentations. Cody and I gave our presentation on the other project I’m associated with (our text editor) and after which I gave mine on what I’ve been doing at the WA Realtors, what they want done and the obstacles I’ve run into. It went fine. It was interesting to see where other people were at this point. After that, I came into the office and proceeded to dive back into the wonderful world of Drupal. Stevie had me download Drupal 7, which technically isn’t ready for a legitimate release, but it’s good to work with it alongside Drupal 6 to see what the differences are and what bugs are present in it. I began practicing with a fictitious site. Lots of fun.

Jan. 21, 2010: Today is very, very quiet. The realtors have an in city conference for two days, so Steve is gone to that and Erika is home sick. It’s just Stevie and I today. Byung is still sequestered in the server room, trying to fix their server issue that has been plaguing him and the association for weeks. We discussed what Stevie’s plans for the CMS were and what he hoped to accomplish. It was a little slow because he had lots of other work to do since conference time is always chaotic. I spent a lot of time working on Drupal, PHP and setting up a temporary web blog site. My plan is to create a permanent site in PHP, but since I haven’t done this before, it might take some time. Next week we really get to work on planning the CMS and building the database.