Mar. 2, 2010: So, today was mainly a day to work a little on the glossary itself (which we are very close now) and then do much studying up on the admin (backend) portion of the glossary page. This will require writing a page to deal with allowing the administrators of the site to edit and maintain the page via login privileges, another page for people (members) other than the admins who can login and get access to another page where they can choose from a dropdown menu which letter to place the entry, a field for the Term and another field for the Definition. If the letterlink was previously inactive, once the entry is submitted, it will automatically set the status to active. I’m glad to finally take a little break from working on the glossary itself, it’s been driving me to near insanity.

Towards the end of the day, I downloaded and reinstalled the newest version of Drupal 7. I tried to do just an update, but Drupal wanted me to connect to their site via FTP (which I haven’t setup for this site since it’s locally on my computer) so they could verify the update. Since I didn’t really have much of anything in the old version, I thought I’d just uninstall the alpha 1 version, get rid of the database and just install the alpha 2 version. So far I haven’t come across any bugs yet. I guess they’re down to about one hundred and thirty some odd bugs left to fix in the new version. We might actually be able to get this up and running by the end of the spring quarter.

Mar. 4, 2010: So after studying for the last couple of days in the Codeignitor book, I started building the admins glossary home page. Below is an example of the code I’ve got.

This is the glossary admins page: 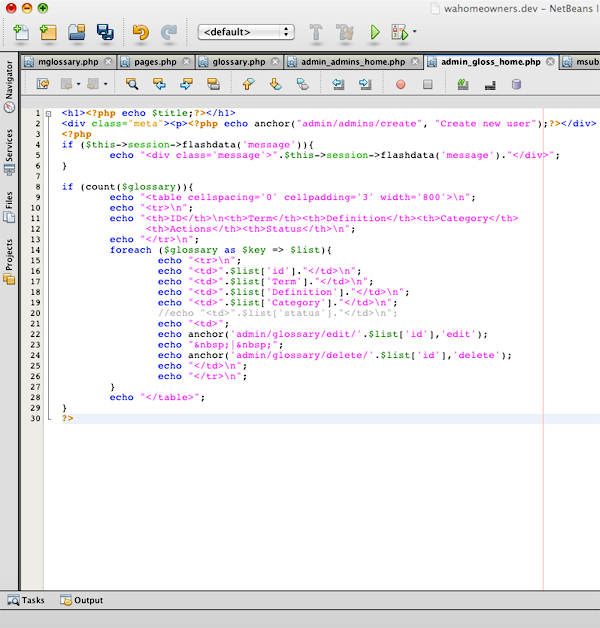 This sets up the structure of the page. It’s basically just the View from MVC structure. It calls the methods from the Controller, shown below:

This is the glossary admins controller page:

The create, edit and delete functions are setup, but not implemented yet. I’ll be working on those next week. The result of the work is produced below:

This is the glossary admins view page: 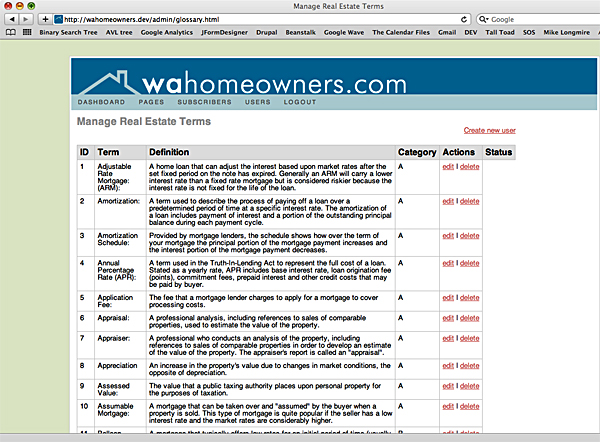 The main issue with this is the same problem we have with the glossary model; as you can see, the status field is blank. This is because I’m having trouble accessing the information in the second database and printing it to the page. This will hopefully be fixed next before I get the create, edit and delete methods working on the controller.